Jörg-Michael Jansen was born in 1964 in Krefeld and grew up in Düsseldorf. He started an apprenticeship by the car dealership Moll in the Porsche department after his general certificate of secondary education. He stayed by Moll and worked there after the early examination in january 1983.

During his time at the Bundeswehr, he repaired HGV in Düsseldorf-Hubbelrath, he started with the restoration of Porsche 356 vehicles in Neuss by La mason des amis. He worked 1986 and 1987 by Mercedes-Benz Fuchs & Wadenpohl and by Mitsubishi + Simca-Chrysler Noelle, both in Düsseldorf.

He started the Meisterschule in october 1987. He graduated successful in july 1988. He started with the experts-activity in Mönchengladbach. He founded his company `Sachverständigengesellschaft Jansen und Partner mbH`, which exists till today.

His hobbies are driving Motor-Cross since he is fifteen, he drives Veteran-Motor-Cross, he loves Old- and Youngtimer and his job. His biggest hobby is the tracking after Leichtbau Maier since 2008. 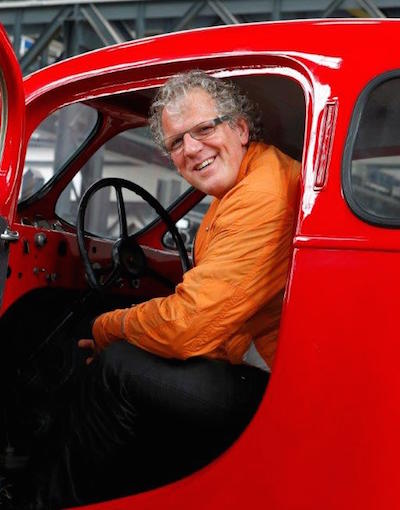 I got a call from a friend at the beginning of 2008. A varnisher had to sell some cars because of financial difficulties. Although there weren`t special cars, but that car was differently.

I should look at that prototype from the 30es because i would be crazy about cars. Yes, that is what i should do! It was so amazing as a saw that car. I was fascinated and overwhelmed. I got goose bumps as i touched the car the first time. No joke!

It stood there still incompletely, but i had to get that car. It isn`t really elegant but in consideration of the year of construction, 1935, that car was from another world, it was ahead of its time. Apart from a brass-name plate with the car number LM0501/35 and some technical data, i knew nothing more about that car. There were many speculations, but no clues at all. For me, it was important to have a valuable unique object of the automobile history, an original of a brilliant engineer.

I saw many interesting details as i looked at the bodywork. There is much space for the driver and fellow passenger, just as in modern cars. But in the early 30es, there sat the people right in front of a straight windscreen. The windscreen of the prototype has 4 separate windscreens. A panorama windscreen wasn`t developed yet and rounded glas was totally unaffordable. The bodywork was rivet with aluminium plates. Before the second war, it was usual to use steel sheets on frameworks, which consists of wood. You can use various material by rivet, also material, which you can not weld together.

The bodyworks` appearance wasn`t changed largely since its completion, but many patent applications were tried out on that car. Several times openings were created, others were closed or reinforced. On the basis of the model plate, the car was first with 20 PS and 692 ccm cubic capacity driven on. As i entered the cubic and the drilling ratio 76/76 into the computer, i found a DKW 4 motor, which was among other things in the DKW-master class F7/F8 from 1935-40 installed. Maier had to have contact to DKW because that motor was only since 1934 offered. Maiers` project had to be very interesting for DKW, otherwise he would never have got it.

Another remarkable invention is, that Maier placed the water-cooled front drive unit in the back. The fins-openings at the back brings additional cooling to the water-cooler at the front and there was now a good sight out of the back as well. Unfortunately the half of the floor-group was cut open and the DKWs` technology was changed with the VWs` technology to have a drivable car for the movie `Tadellöser und Wolff` at the end of the 70es. On the yellowed pictures by the equipment company you can still see the DKW-technology and a large suspension strut with independent suspension in the back.

For me, it was clear that that car had to be completed and it should be drivable again. Parallel to the investigation, i completed the the vehicle, so it can drive again. It came to many contacts: First of all the museum PROTOTYPEN in Hamburg. They gave me information about Hans-Peter Bröhl, a prototype historian from Switzerland. He had a few photos of the movie scene, the movie equipment company and he had the owners` address. Mr. Heinz Vogel from Gutland in Aachen. he could tell me, where he got that car and to whom he sold it. Mr. Vogel found some photos of the sales offer and of the car.

I stucked in Maiers` history. Then the Dyck castle and Mr. Herman van Oldeneel came into it. He found the whole name and we could find only now more about the development of that car out. Maiers` life story is another exciting story...